On Wednesday 13 October, the event "Cross-border Railway in Europe: The Brenner Axis at the heart of the ScanMed Corridor" took place in Brussels. Thereby, high-ranking representatives from politics and economy discussed about cross-border freight and passenger rail transport and about the ScanMed corridor and the Brenner axis in particular. 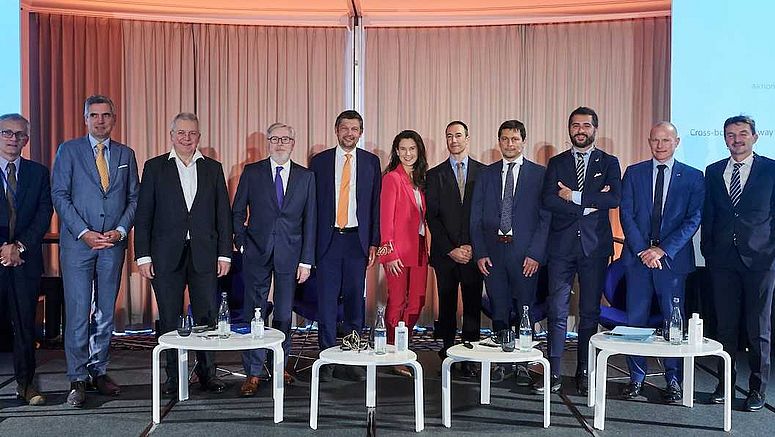 The South Tyrolian Presidency of the “Aktionsgemeinschaft Brennerbahn/Comunità d'Azione Ferrovia del Brennero”, which celebrated its 25th anniversary this year, organised the event together with the Bolzano Chamber of Commerce and the Foreign Office of the Autonomous Province of Bolzano, as an element embedded in the “European Year of Rail 2021”. At the event, the speakers discussed the strategic importance of the Brenner axis for the Scan Med corridor, which encompasses the Scandinavian countries as far as to southern Italy.

In his welcoming speech, Deputy Provincial Governor and Provincial Councillor for “Ladin Education and Culture, Mobility and Infrastructure”, Daniel Alfreider, underlined the importance of rail transport as a sustainable solution to achieve the goals of the European Green Deal: “Over a hundred years ago, the railway infrastructure was built, because there were no cars. Today we are expanding it, because there are too many cars.” Michl Ebner, President of the Bolzano Chamber of Commerce, on the other hand, emphasised in his welcoming remarks the necessity of interregional cooperation in the search for solutions concerning the challenges of the Brenner axis: “The Brenner is one of the most important European corridors (...). It is up to all those actors involved to find constructive and future-oriented solutions for a smarter and more sustainable mobility on the whole axis.” The participation of Pat Cox, coordinator of the ScanMed corridor, underlined the importance of the Brenner corridor as a strategic part of the European transport policy.

BrusselsLatest NewsEvents of the Representation