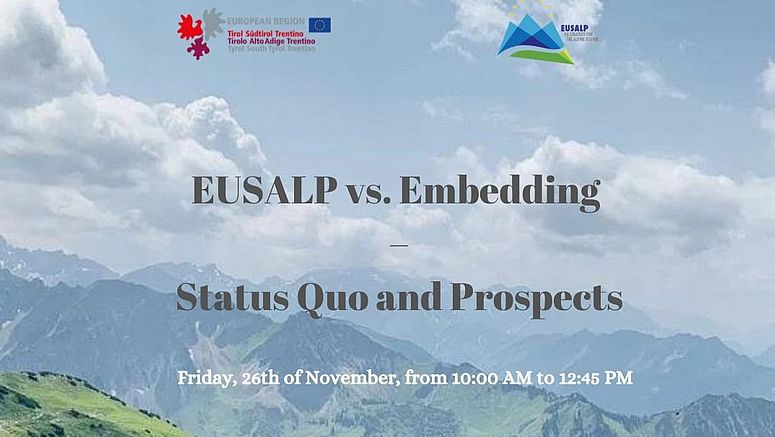 EUSALP debates on opportunities for the funding of coordinated actions.© Euregio

'Embedding' - which is a principle to access direct and mostly indirect fundings provided by the European Union by the Macroregions - already reappeared as the main topic within the week of the Macroregional Strategies in March 2021. EUSALP, as well as other Macroregions in Europe, faced the problem of a lack of dedicated funding opportunities. However, it is clear that also these forms of cooperation need a tool to access EU-funding without the obstacle of a tight bureaucracy. In particular, the nine action groups claim guidelines to access those funds. Guidelines on EU direct funding and Macroregional Strategies should be published soon by the European Commission. Thus, the Italian Presidency of the Macroregional Strategy for the Alps - which will begin with the new year - puts embedding at the center of its 2022 work programme.

The speakers of the virtual workshop agreed on the fact that we are now in a transition period between the planning and the implementation phase of embedding: The real work starts now.

The workshop with the title 'EUSALP vs. Embedding. Status Quo and Prospects' had been conjointly organised by the Autonomous Province of Bozen/Bolzano - South Tyrol and the Autonomous Province of Trento in light of the upcoming Italian Presidency of EUSALP. After a video message by the Member to the European Parliament Herbert Dorfmann and a keynote speech by Jean-Pierre Halkin, Head of Unit, Directorate-General for Regional and Urban Policy (European Commission), the following speakers intervened:

Furthermore, Robert Lichtner, Coordinator of the Danube Strategy Point Vienna, brought the experience of another Macroregional Strategy. Last but not least, Martha Gärber, Director of the Department Europe of the Autonomous Province of Bozen/Bolzano - South Tyrol took the floor.